Autism, Brain Development, and the Amish: Are We Asking the Right Questions?

Autism is a more and more common occurrence.  I often hear the term “spectrum disorder”, which is meant to refer to someone who on the autism spectrum.  In college, I was a research assistance to a sociology professor searching for any relationship between autism and nutrition.  We found no statistically significant correlations. I remember him talking about more severe cases of autism possibly being caused by damage to ear from a severe ear infection before the age of 2.  The result was that certain “tones” were not heard but experienced as pain.  It was just another theory.  The one thing I remember him saying is that nobody knows what causes it or how to cure it. 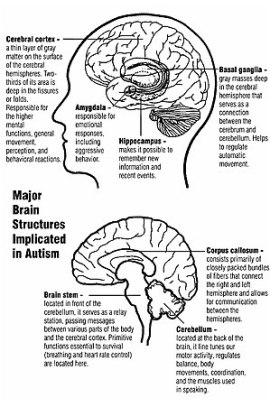 All these years later, it really doesn’t seem that we have come that far in answering the questions of cause and cure.  In the OpEdNews  article, What We Are Not Looking At With Autism by Lon Jones, an interesting perspective is proposed.  Now, I am not an expert on autism or even the body of research done on autism, but I do appreciate when people consider standing back and taking a simpler approach.  I have heard, like maybe you have heard as well, that autism is caused by the mercury level in vaccines or by too much TV.  Mr Jones suggests that while at least the TV part may be true, but it might only be part of the answer or part of a bigger question we should be asking.  He also talks about taking into consideration the larger context of the situation:

What we don’t look at are primitive cultures where the problem doesn’t exist, or at our own Amish peoples, where it is minimal, or at our children delivered by midwives, where the incidence is less. While we look intently at what differences there are in comparing the brains of autistic and normal children we do not look at how the normal development of autistic children may have been disrupted. Nor is there any consideration for how we may intervene in that development to limit the problem. Researchers at Cornell looked at television, and at the hypothetical link between rainy weather and time in front of the tube, as significantly related, but that gets back to blaming parents.

While there is no question that mothers care and love their children there is also little question that few understand the neurological development of their children and that parents are often distracted from the task of looking at their infants faces. The demands of other children, the telephone, the texting, the twittering, Facebook, blogging, television programs, all distract from the process of building this foundation in the infant’s brain. Doing prospective studies to check out this link would be both unethical and cruel. But educating parents, both fathers and mothers, of the overwhelming importance of this early neurological development and encouraging them to devote time to this task would be both helpful in a child’s development and, if it is indeed a factor in autism, may control the epidemic.

Click here to read the complete article: What We Are Not Looking At With Autism

I know cases of autism that may not fit into the framework that he is suggesting.  I do know that the Amish and more “primitive” (?) cultures have frameworks of community where each and every individual member is supported in a way that it seems we as modern Americans struggle to do consistently.  Maybe he is on to something, maybe we do need to learn more about neurological development, maybe we need to make face time a priority, maybe we need to slow down a little…maybe we need to do these things regardless.